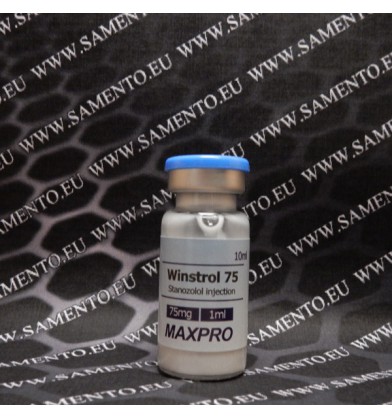 This is another one of the popular ones. Next to Deca and D-bol the third most abused substance among athletes is stanozolol, as documented by the many positive drug tests. Among them the case sprinter Ben Johnson, who was stripped of his Gold Medal in the 100 meter dash in the 1988 Olympics. But since then the number of positives has grown exponentially. In bodybuilding Shawn Ray's positive in the 1990 Arnold Schwarzenegger Classic (a brief stint the IFBB had with drug testing). Ray was the winner of that event, but Canadion pro Nimrod King was also shown to have stanazolol metabolites in his urine.

That short paragraph to illustrate what sort of an impact it has made on the world of sports. Stanozolol is commonly referred to as Winny, after its trade name as marketed by Winthrop : Winstrol. In Europe this may be a bit confusing as the most available form there is called Stromba. Winny comes in two forms, an injectable form and an oral form. Both are equally popular and both are to be used daily. The injections are the same compound as the orals, which is methylated. Due to this feat it can't be esterified for time-release. So its not quite suited for weekly injections although this is claimed on the package insert of the veterinary form of Winny. Another thing that would further add to the difficulty of time-release is that it is delivered in an aqueous solution. That would not exactly facilitate the entry into adipose tissue, needed for the esterification and storage of the substrate in the body.

The injectable version often gives more results. In similar doses there is still more breakdown upon first pass in the liver, making it difficult to get an equal amount absorbed. And on top of that it has to be mentioned that most people simply don't take an equal amount. Too many pills, lesser availability, higher cost. Many factors play a role in that. But of course an oral is to be preferred over daily injections as that gives the necessary complications as well. Think of abscesses and lumps, the searching for new injection sites due to pain and so on. Some have solved this problem by simply drinking the Winny injections. It's the same substance, also methylated to withstand the liver, the availability and price are better and its contained in water. So there really aren't many objections to this.
Of course because they are the same substance, regardless of the method of use, its not advised to use Winny for long periods of time. Slightly less hepatoxic than most 17-alpha alkylated substrates, so it can be used a bit longer, as long as 8 weeks, but longer than that is not wise. Elevation of liver values is quite common.

The specificity of Winny however, lies in how it counteracts estrogenic side-effects such as gyno and excess water retention. First of all it's a 5-alpha reduced substrate. 5-alpha reduction breaks the double bond between positions 4 and 5, which is required for conversion to estrogen via aromatase, the primary enzyme for the manufacture of estrogen in males. Because some of these compounds nonetheless show some affinity for aromatase they may have some use in blocking estrogen from other steroids they are stacked with. Wether or not Winny acts in this way is not entirely sure. What has been a popular point of discussion with stanozolol is its suggested anti-progestagenic effects. The theory goes that Winny can bind and compete for a position at the progesterone receptor much like Clomid of Nolvadex would at the estrogen receptor, thereby inhibiting progestagenic effects. Now, progesterone can aggravate estrogenic side-effects by agonizing estrogen and it does play a role in gyno.

We also discussed that certain steroids may indeed stimulate and act at the height of the progesterone receptor including nandrolone and Norethandrolone. These hormones are also altered by it inducing a decrease in libido and a sense of lethargy and such, and eventhough they aromatize in lesser rates than some other steroids, they show an equal capability to cause estrogenic side-effects, particularly when stacked with other aromatizable compounds. Now there is evidence that Winny does indeed bind to the progesterone receptor1 and its users do not indicate the normal characteristics of progesterone stimulation, which bodes well for these anti-progestagenic properties. There is also some clinical data that it does aid in symptoms that require progesterone suppression2. Much in the way danazol was also successfully used. The one thing we shouldn't lose sight of however is in what rate it binds to the progesterone reception. There is no data on this. For all we know it couldn't bind strong enough to compete with nandrolone or norethandrolone. So its not wise to state that Winny is an anti-progestagin per se, but it does make Winny a good match for these products in stacks in any case.

Strong gains are never really made while using stanozolol (it's a weak androgen since it has no 3-keto group needed for androgen binding), but decent and fairly easy to maintain gains are possible. Its limited time of use however makes most experienced users opt for other steroids in that regard. Winny, in bodybuilding circles at least, is used mostly during cutting cycles to maintain mass. Winstrol, like a DHT compound also gives a distinct increase in muscle hardness and striations in people with a low body-fat percentage. This lends further credence that it too may be a an anti-estrogen. But most likely it has more to do with the overall lower levels of circulating estrogen. Winny is also quite effective at promoting strength because it binds very well at the androgen receptor. Short term stanozolol use can promote drastic strength, a feat often employed early in a bulking cycle (although d-bol would be more suited in that case) or late in a cutting cycle to prevent a decrease in performance. This combined with the red blood cell count-stimulating properties of its androgen affinity make it popular among track athletes as well in order to beget better results. As many, including Ben Johnson, did not take into account it can be detected for quite some time after last use so its not advisable for drug tested athletes. Many have assumed otherwise due to the short half-life, but apparently some inactive metabolites are easily esterified, so they can be found up to 5 months after the last injection.

Winny is mostly quite well-tolerated in men. Cramps, headaches, elevated blood pressure and cholesterol levels and liver damage are noted, but on a not so-frequent basis. Standard virilization symptoms associated with the stimulating of the androgen receptor, however, are a problem. Acne, prostate hypertrophy and an aggravation of male pattern baldness can occur, so use by women has to be discouraged.

Due to the frequent rate of injections, users generally have to go spotting for different sites of injection on the body. Calves, shoulders, arms and such. When doing so they noted a localized increase in mass which has given root to the myth that Winny can add muscle where it is injected. What I'm about to say goes for all compounds known to date : Steroids do not increase mass locally. The observance is noted because the injection breaks the fascia around the muscle, which possibly gives a muscle a little more room to grow. This is mostly temporary, and in the best cases very limited. Multiple injections would not increase the size in comparison. When the fascia heals, if it heals, it can lead to something called compartments syndrome, where a nerve is pinched between a muscle and its fascia. Leading to numbness quite often and in some cases to a paralysis of everything that nerve controls. This is not a frequent occurrence. This is rare, but my point was documenting that localized growth spurred by an injection is a myth.

A last note about injectable Winny is : shake before use. Its called an aqueous solution, but the Winny being a steroid is not particularly polar, meaning it doesn't dissolve in the water. When the stuff sits, it will accumulate at the bottom of the vial. A good way to recognize the real stuff as well. So shake before you draw it into a syringe or mix it before you drink it, and perhaps even stir it again once in the syringe prior to injection.

Winstrol is best used at a rate of 50 mg a day. When in an injection that amounts to a single injection every day around the same time. In orals, that'll be at least 5 tabs of a legit product.

In a mass stack Winny makes a good match for Deca and Nilevar. Whether or not its anti-progestagenic effects are for real or not, lets just say it can't hurt. In any stack with Deca the use of 25-50 mg a day for the first 6-8 weeks of the stack can kickstart it and add some strength. With Nilevar there is a practical objection because it is also 17-alpha alkylated and more toxic than Winny, so your stack would be limited to 6 weeks, which is not overly productive.