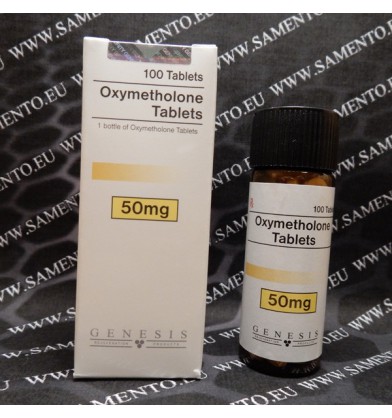 Oxymetholone is without a doubt the strongest and most visibly active steroid to date. Not only does it act very rapidly, it causes a virtual explosion of mass. Gains of up to 10 pounds in 2 weeks are not uncommon. This is largely due to a moderate to low androgenic effect combined with a high anabolic activity also mediated by non-AR mechanisms (mechanisms other than simply binding the androgen receptor). You can imagine that the gains made on oxymetholone aren't the leanest. You would note a drastic smoothing out of the muscle due to estrogen-related fat (lipolysis) and water retention. This lipolysis has been shown to be rather drastic. One study1 on long-term hemodialysis patients showed beyond a doubt the role that oxymetholone can play in causing hyperlipedemia. The fat deposition rate, post-hepatic (after processing by the liver), increased drastically in the oxymetholone group while numbers remained stable in the control group.

It has been suggested that the estrogenic effects of oxymetholone may not be as much mediated by estrogen, as by oxymetholone itself activating the estrogen receptor. Because there is little to no aromatisation off oxymetholone, the possible progestational effect was examined first. Similar to that of nandrolone perhaps. But a study2 testing the progestational effects of oxymetholone and methandrostenolone against those of testosterone as well as nandrolone and its metabolites showed that the progestagenic activity of oxymetholone wasn't even in the neighbourhood of that of testosterone, let alone nandrolone. Ruling out the possibility of progestagenic activity and aromatisation, that only left oxymetholone engaging in a structure with the estrogen receptor itself. Since it has an A-ring similar to that of estradiol (the prime estrogen) so this would be the most logical explanation. Since progesterone acts as an estrogen agonist, it would require circulating estrogen to negotiate such levels of water build-up as oxymetholone causes, so it seemed like a far-fetched idea to begin with.

The water component resulting from oxymetholone use is not be under-estimated either. The benefit of water retention is of course a lubrication of the joints, allowing the comfort of pain-free workouts even with extremely heavy weights, as well as the retention of more nutrients inside the cell, possibly leading to more permanent growth in muscle tissue. The downside to a massive water retention is that it gives you a rather puffed up look. A look not uncommon in off-season competitive bodybuilders and the heaviest classes of powerlifters. With the estrogen increase of course comes the increased risk of more side-effects such as gynocomastia (growth of breast tissue in men). Therefore its always advised that a cycle of oxymetholone is accompanied by the use of an anti-estrogen such as Nolvadex. Nolvadex, keeping in mind that aromatase enzyme is not involved, would be the wiser choice as it blocks the receptor for estrogen rather than the aromatase enzyme. Its wise to note as well that the gains from oxymetholone are largely mediated by estrogen, so reducing estrogen may reduce results as well.

Because it is mild androgen as well as a potent estrogen, blood volume is increased. Androgens raise the red blood cells (although this has been shown to happen through a mechanism other than erythropoesis3) to improve aerobic performance while estrogens increase the white blood cells in an attempt to stimulate the immunity. Couple that increase in blood cells to an increase in water and you get a serious increase in blood volume. This effect has been known to result in magnificent pumps for the users of oxymetholone products. The synthesis of extra erythrocytes (Red blood cells) also increases stamina and performance (this effect is largely negated by the larger estrogenic component. Oxymetholone is not a good product for athletes). Together with the unbelievable strength effect of oxymetholone's water retention that makes for some incredible workouts. On a side note, these characteristics make for anadrol's popular use in treating anemia.

The use of oxymetholone should be strict and brief. While it is no doubt the strongest steroid, quantitatively, its also by far the most hazardous steroid to your health. Apart from the great risk of common steroid-related side-effects (acne vulgaris, benign prostate hypertrophy, gynocomastia and androgenetic alopecia), it also has numerous other side-effects. Most notable is oxymetholone's hepatoxicity (damaging to the liver) : Its standard 17-alpha-alkylated as with most oral steroids, resulting in an inavoidable raise in liver transaminase enzyme counts. The most frequent of the hepatoxic effects is jaundice4 (yellow coloration of the skin) due to an oxymetholone induced increase in biliburine, but others include peliosis hepatis and formation of hepatic tumors (cancer). And that's not all. There is also a number of intrinsic side-effects noted with the use of this steroid. Headaches, stomach aches, nausea, vomiting, insomnia and diarrhea are among common afflictions associated with oxymetholone use.

This is the reason why only strict doses of oxymetholone are used , often only 1-2 tabs of 50 mg. The general rule of thumb is to use 0.5 or 0.6 mg per pound of bodyweight, most likely putting you in the 100-150 mg range. Because of the negative effects on the liver, its often not used for more than a two or three weeks. The results are fast, but also fleeting and therapy is usually continued with another aromatizable compound, most likely a long acting testosterone like Sustanon or testosterone enanthate. The Anabolic Review also warns that under no circumstances should oxymetholone use exceed 6 weeks. When using oxymetholone, or any oral 17-alpha-alkylated steroid for that matter, one should always consult a physician on a frequent basis and get your liver values checked. Its not that oxymetholone is necessarily more toxic to the liver, but rather that much higher doses are needed than with other oral steroids, so the relative risk increases as well.

Other notes I should mention about this compound are that oxymetholone's androgenic qualities are not linked to a 5-alpha reduced form. As a matter of fact it shows rather poor interaction with the 5AR enzyme, making it futile to treat a possible increase in hair loss with 5-alpha reductase-blocking products such as finasteride. Its androgenic component stems from the fact that oxymetholone is very much like Dihydrotestosterone were it not for the added 2-hydroxymethylene group. Since this group can be metabolically removed, that would leave methyl-DHT. A compound with a weaker affinity for the androgen receptor than straight DHT, but more active and with less affinity for the DHT-reducing enzyme 3beta hydroxysteroid dehydrogenase. Ultimately resulting in much stronger, instead of weaker androgenic effects than compounds that are actively 5-alpha reduced. This evens out largely, because the distribution is even across the body, where 5-alpha-reduction usually concentrates more potent androgenic forms in androgen responsive tissue such as skin and scalp.

The effect on the blood pressure is rather drastic, so its recommend that you use a anti-hypertensive drug in conjunction, especially if you already have a fairly high blood pressure. Here too the care and control of a physician is advised. Because of the HPTA (hypothalamic-pituitary-testicular axis) suppressive nature, the use of Clomid or Nolvadex and HCG is advised as well towards the end of your oxymetholone use. Lastly, oxymetholone also has an ill effect on the glucose tolerance5, causing borderline diabetic situations. Something to be weary of if you yourself have been diagnosed with similar problems already.

In conclusion one can safely state that the negative effects on the system associated with the use of this hormone are rather drastic and that the use is therefore not recommended for beginners, women or people who have pre-existing afflictions. Nonetheless Anadrol remains a popular steroid among experienced users to kick-start a steroid cycle because of its magnificent increases in strength and size. Most people who have used oxymetholone with great success have no problem calling it the strongest and most reliable steroid available today. A somewhat surprising remark however, since Methandrostenolone can produce similar results with half or a third of the doses normally used with oxymetholone and with less side-effects. So personally I would recommend methandrostenolone over oxymethelone, as its clearly stronger, milligram fro milligram. Oxymetholone remains a strong and favorable compound however, despite its side-effects. Its effects may also be slightly more explosive than those of methandrostenolone and therefore people seeking strength may give it an edge over the former.

A lot of oxymetholone products were discontinued in the early 90's due to the high rate of side-effects, making them rather uninteresting. The renewed interest came when it was being effectively used in the treatment of the wasting disease AIDS, sparking a comeback. Nonetheless users should note that the original 50 mg Anadrol50 was taken over by Unimed. The original Anadrol50 by Syntex is no longer made or found. There has also been a surge of legit underground compounds such as the Ttokkyo oxymetolona 50. So be careful and do your homework when looking for Oxymetholone.

Anadrol is an oral only compound and is 17-alpha alkylated with a methylgroup to allow for a higher yield when having to traverse the liver, as with most oral compounds. As such it has a good degree of hepatoxicity and should not be used for longer than 6 weeks on end and it is highly recommended that you get your liver values checked regularly. Because of its long activity and poor affinity (due the the 17AA) good results can be obtained with a single daily dose, so spreading your doses out is an option but is anything but necessary. A single dose of 50-100 mg every day is recommended, but doses as high as 150 or 200 are used by experienced bodybuilders as well. Due to its rapid action and high toxicity, its mostly used to kickstart a longer injectable cycle in the first 3-5 weeks of that cycle. It will add a lot of mass and strength on immediately, getting you through the low-result beginning of an injectable cycle. Its use is thus very similar to that of Dianabol, but with the latter being slightly more versatile.

As such it makes a good match early in a stack with you standard testosterone/nandrolone stacks, with boldenone (equipoise) and methenolone (primobolan) as well. Since it has a high intrinsic affinity for the estrogen receptor and next to no intrinsic affinity for the androgen receptor I doubt anyone would contemplate using this for cutting. To even out the massive water retention one might choose to stack it with trenbolone (finaplix/parabolan) or stanazolol (Winstrol/Stromba) but never for the purpose of looking lean. Anadrol, like Dianabol, may also be one of the few orals that has real merit when using it alone. Although the gains are often hard, near impossible to keep afterwards.

In terms of secondary drugs, I wish I had a lot to recommend here, but really there isn't much to be helped with oxymetholone. Even with liver protection it would still do serious damage and with every bit of added protection, the efficacy rate of oxymetholone would go down. As for estrogen maintenance, Nolvadex being the strongest of estrogen receptor antagonists comes highly recommended and preferably in higher than normal doses, 30-40 mg, as its oxymetholone itself that is the culprit and not its aromatized form. On the other hand, we need to take into account that more than half of Anadrol's anabolic action stems from this estrogenic action as well. So its sort of trading less side-effects for gains. One thing that is advised is blood pressure medication as extreme hypertension has been noted. And I'll say it a third and last time, its best to get regular liver check-ups when taking Anadrol.