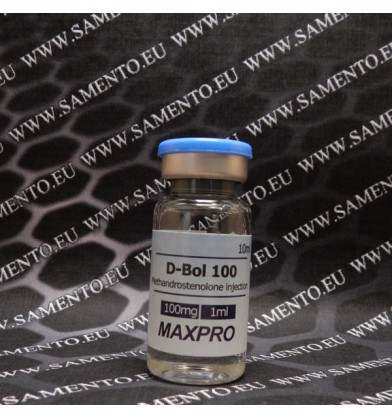 Methandrostenolone is without a doubt one of the best, if not the best product for people who compete in non-aerobic oriented sports. It promotes drastic protein synthesis, enhances glycogenolysis (repletion of glycogen after exercise) and stimulates strength in a very direct and fast-acting way. It may be less useful to those competing in aerobic events as it also diminishes cell respiration1. But methandrostenolone manifests itself in a distinct manner : rapid and fast-acting build-up of strength and mass is noticed. That's why its often used at the beginning of cycle consisting of mostly injectables like long-acting testosterone esters and nandrolone. Since the effects of such drugs don't fully come out for the first 10-15 days, methandrostenolone is dosed in to provide immediate and visible results. It has a rather weak androgenic component and an obviously quite strong and visible anabolic component. Its effects are largely non-AR mediated, which is documented by its rather low influence on the natural endocrine system2 and the fact that it decreases rather than increases red blood cell content in the blood. Which means that one worry users of Dianabol, especially short term, needn't fear is the dramatic shutdown of natural testosterone production as is often the case with very androgenic compounds. Of course this effect is dose-dependent. It still has a mild androgenic component, meaning in high doses (30+ mg daily) androgen-mediated side-effects can be noted (acne, male pattern hair loss).

Because of its fast effects, immense popularity and the increasing "more-is-better" sentiment among bodybuilders, increasingly high doses are indeed being used and recommended. One has to wonder about the logic of such recommendations however, since high dose urine-analysis showed portions of unmetabolized compounds were being excreted3. In simpler terms that means that with higher doses, higher amounts of unchanged methandrostenolone were being excreted in the urine. This would indicate that the current stance needs to be reviewed and that smaller doses, taken multiple times per day would deliver better results and maximal use of the steroid. Dianabol simply is highly effective in low doses(25-40 mg ed). Som say Anadrol, a comparable steroid to methandrostenolone, is better, but its taken in doses of 50-150 mg. If one was to take methandrostenolone in those doses better gains could be expected. Methandrostenolone is also a lot safer in as opposed to the highly toxic and progestagenic anadrol. If one takes into account that the half-life of methandrostenolone in the body is only 3-6 hours, this theory makes even more sense. So taking your daily dose spread over 3 or 4 doses may elicit a better effect than only 1 or 2 doses. Methandrostenolone is quite effective in these lower doses by the way. Milligram for Milligram its more powerful than a testosterone ester, generally considered the best mass-builder.

A few notes there need to be made however. Not everyone should try and spread their doses out over multiple servings. First of all there is a slightly lower efficacy to take into account here as well due to two characteristics. The first being that you feed the total amount to the liver in smaller portions, yet the liver still manages to metabolize the same amount. Percentage wise that means less methandienone would make it through totally. The second would be that the peak levels aren't quite as high since no large doses are taken all at once. These two facts make it hard to recommend that just anyone take multiple doses. People who take moderate to low doses of ONLY methandrostenolone should probably opt for a single morning dose. This delivers a higher peak level and more survival of your only steroid. It also, due to the short half-life, makes the drug clear the body before the body produces its largest dose of natural testosterone, the early hours of sleep. Combined with the already mild effect at the AR, you could keep a good amount of your gains when using clomid or Nolvadex post-cycle. For those using it in conjunction with other, mostly injectable steroids, two doses seems to be the better choice, if you are taking in excess of 40 mg a day perhaps even three doses.

This is usually the case for fast-acting substances, they have short half-lives. Which brings us to the point of prolonged use. The general concensus is that methandrostenolone should never be used more than 6 weeks on end due its strong hepatoxic effects. Being largely an oral compound, its also 17-alpha-alkylated to help it survive the liver upon first pass. Liver values are elevated over a short period of time4, making long-term use a very dangerous affair. Liver values should return to normal quite fast after discontinuation however since the effects are so short-lived. Other risks associated with the use of methandrostenolone include the apparition of estrogenic side-effects because it interacts rather well with the aromatase enzyme on account of its methylated properties. It is therefore best used in conjunction with an anti-estrogen. Gynocomastia, high blood pressure, salt and water retention and mild cases of acne are therefore not uncommon.

Its methylated properties (17-methyl group) does have several positive characteristics of course. Why else would they add this group? The main purpose of course it to make sure less of the methandrostenolone is affected by hepatic breakdown when taken orally. But apparently it also decreases the affinity of the drug to SHBG (sex-hormone binding globulin), a sex steroid binding protein that takes up as much as 98% of testosterone. Testosterone that can't be used to build muscle. Since methandrostenolone does not bind to this protein easily, its quite an active substance, no doubt accounting for its fast and immediately visible action. Dianabol also does not affect cholesterol levels to a high degree in moderate doses5, and it seems to help an athlete stock up on potassium6. This is particularly beneficial taking into account the amount of sodium its estrogenic effects store as well.

The Best Use For Methandrostenolone

We hinted at the short time of activity methandrostenolone possesses. This means that despite its immediate, fast and explosive gains in both strength and mass, they are quite hard to maintain. Often the bulk of mass is lost shortly after discontinuation, making it most unsuitable for those looking to gain and keep quality muscle. An injectable may suppress some of these obviously flawed characteristics, but the 5 mg tabs remain the trend. With its high capacity to survive breakdown in the liver this understandably. Orally its perhaps the most powerful, although in the strength of effects it still can't hold a candle to androl. But its cheaper and safer than the aforementioned of course.

In light of the evidence presented, we conclude that the best use for methandrostenolone is short-term, for 5-6 weeks, at the beginning of a longer bulking stack (10+ weeks), preferably injectable, to kickstart gains and strength. Its effects are largely non-AR mediated and it aromatizes quite well, which leaves it with limited stacking partners, The best candidates are of course nandrolone and testosterone. It should be taken in doses no higher than 50 mg (20-40 mg being the norm) ,spread over multiple doses for maximum effects in stacks and a single morning dose when taken by itself. D-bol remains a favorite today however, that's a fact that cannot be argued.

I needn't really expand too much, since most of the conclusion were drawn in that last paragraph. Dianabol is a methylated compound with a certain toxicity, so in the interest of safety you wouldn't use it longer than 6 weeks on end, 8 weeks at the absolute maximum and only under supervision of a medical professional who can monitor your liver values. Because it heavily aromatizes its not particularly useful during cutting and with 6-8 weeks of use maximum, that leaves but two options. Either stacking it with another, injectable, compound that can be used for longer terms (beginning of stack when other compound is least active) or you would do multiple short cycles. In that case one would take off at least as long as he was on during a cycle, preferably longer. Like 6 weeks on, followed by 6-10 weeks off. These multiple cycles were all the fashion among pro bodybuilders in the 70's with very decent results.

When stacking with a longer-acting product, such as testosterone enanthate or cypionate, Deca or Equipoise, the best use is early on in the stack. Dianabol is a very fast-acting steroid and most injectables don't start showing their real value for 2-3 weeks. That makes it particularly useful to kick off a cycle with.

It's most readily stacked with Deca-Durabolin or Primobolan, perhaps even Equipoise. Usually an injection of 200-400 mg/week combined with 30-40 mg of Dianabol everyday. In some cases testosterone was used in conjunction with anyone of these stacks. For short term use oral Primobolan made a good match, and in lesser ways an oral Winstrol. Both provide a mild, lean foundation for the Dianabol and both are also 17-alpha alkylated, warranting short-term use. Since Dianabol has little Androgen receptor activity, it functions particularly synergistic with compounds that have a strong Androgen receptor activity as is the case for all the aforementioned.

Along the lines of secondary products an anti-aromatase like Cytadren or Arimidex may be useful. When stacked with Deca, the choice for a receptor antagonist like Clomid or Nolvadex is perhaps a wiser choice. Perhaps even a combination of both. Dianabol aromatizes rather heavily, which means in a stack with another aromatizing compound the risk for gyno remains high and water retention is virtually a fact. Post-cycle the use of Clomid or Nolvadex can be employed to boost natural testosterone production. There is quite some circulating estrogen post-cycle that causes prolonged negative feedback, clomid or Nolvadex would solve that problem and help you retain more of your gains.