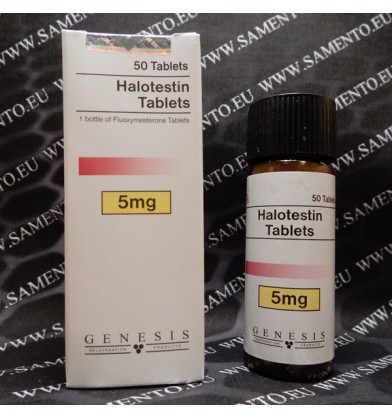 With the exception of perhaps anadrol, Halotestin is the single most dangerous steroid to use. Its liver toxicity is unrivaled and you wouldn't be the first person to end up in the hospital with jaundice and dangerously elevated liver values after a hefty cycle of fluoxymesterone. My question has often been simply "Why?". Fluoxymesterone has a low anabolic capacity. The results in mass would be small to non-existent. Qualitatively similar gains as one would book with trenbolone, but tren would go for equal or less money, deliver three times the gains and wouldn't be half as risky to use. Therefor the sole marked use of fluoxymesterone that is actually warranted is that by power- and weightlifters seeking to boost strength while remaining in a set weight class.

In bodybuilding its used near the end of cutting cycles, since in people with an already low body-fat percentage it adds a distinct hardness and definition to the look, although, as stated, better and safer products will achieve similar effects. As with these alternatives fluoxymesterone has absolutely zero estrogenic activity and will thus not add water or fat to the frame in any way.

While a definite increase in aggressiveness and a notable rise in erythrropoesis is noticed with the use of fluoxymesterone, it has been theorized that it actually has very moderate binding to the androgen receptor. Either that or it shows a higher affinity for other receptors. The enzyme aromatase comes to mind because of the effect it has, like a DHT compound would, on muscle hardness. The latter seems like a better explanation. On the one hand there is nothing that would immediately indicate it acting on the androgen receptor, on the other there is very good likeness to other steroids that are mostly AR-mediated. Its my best guess that not all has been said about fluoxymesterone. Its not a very interesting or grateful object of study however due to the high risk and low yield of this particular steroid.

Athletes that may consider its use are endurance athletes that do not get drug tested (as it is quite easy to detect). The stimulating effect on erythropoesis (red blood cell production) and cell respiration, such an athlete would find a good use for the increase in aerobic capacity noticed for this, without adding unnecessary bodyweight to the frame he has to carry. In this aspect it may be good to note that a short cycle of Halotestin with a moderately long cycle of Equipoise may have some merit in this instance. Neither would increase water retention drastically, neither would give explosive gains. But both have positive effects on the VO2 max.

In any case, and whatever the reason of use, 4 weeks is the best duration of use, 6 weeks at the most. As stated before, many athletes, having used fluoxymesterone while not under supervision of a physician, have ended up in the hospital with life-threatening conditions.

Halotestin is taken in mild doses (10-20 mg) every day for short periods of time, 4 weeks, 6 weeks at the very most due to its high level of toxicity. The use of anti-estrogens is not necessary since fluoxymesterone does not aromatize at all. As secondary drugs one may want to consider blood pressure medication such as catepressan to avoid hypertensive conditions. What you will definitely need is a check of liver values on a regular basis if you want to play it safe. I don't normally recommend the use of liver-protectors during a cycle as enhances liver function breaks down a greater amount of your steroid, but in this case you ought to make an exception. Milk thistle, dessicated liver, vitamin B6 and such both during and after a cycle are highly advised. There is no need for clomid of Nolvadex use after a cycle to bring back natural test.

Halotestin really only serves a purpose as a bodybuilding drug when the athlete is cutting. Probably in the late stages of a cutting cycle to promote muscle density and hardness, preserve muscle tissue and such. To that effect it may be good to use some Halotestin (20-30 mg/day) the last 4 weeks of a boldenone or methenolone cycle for example, or at the end of a stack with trenbolone. It may make a good stacking partner for stanazolol (Winstrol/Stromba) as well since they serve the same purpose. But frankly in all cases opting for a higher dose of the other drug may be a better choice, both in terms of gains and safety. Boldenone (Equipoise) being the one possible exception. Due to its toxicity Halotestin is not much sought out in stacks.