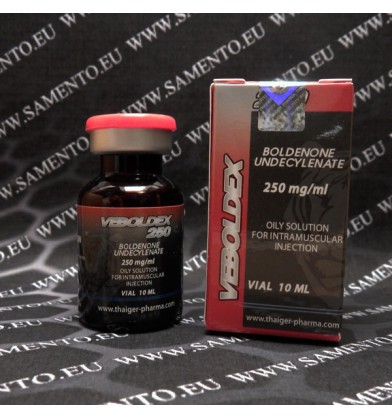 Aromatization: Some, about 50% less than testosterone

Boldenone undecylenate is a derivative of testosterone, which exhibits strong anabolic and moderately androgenic properties. Veboldex 250, Thaiger Pharma. The undecylenate ester greatly extends the activity of the drug (the undecylenate ester is only one carbon atom longer than decanoate), so that clinically injections would need to be repeated every three or four weeks. In the veterinary feild Boldenone undecylenate is most commonly used on horses, exhibiting a pronounced effect on lean bodyweight, appetite and general disposition of the animal. As with all steroids, this compound shows a marked ability for increasing red blood cell production. In recent years this compound has become a favorite among athletes. Many consider it an ideal replacement to Deca-Durabolin.

The side effects of Boldenone undecylenate are generally mild. The structure of boldenone does allow it to convert into estrogen, but it does not have an extremely high affinity to do so. If we look at aromatization Veboldex 250, Thaiger Pharma studies, they suggest that its rate of estrogen conversion should be about half that of testosterone's. Water retention with this drug would therefore be slightly higher than that with Deca-Durabolin (with an estimated 20% conversion), but much less than we would find with a stronger compound as Testosterone. While there is still a chance of encountering an estrogen related side effect as such when using Boldenone undecylenate, problems are usually not encountered at a moderate dosage level. Gynecomastia might become a problem, but usually only with very sensitive individuals or (again) with those using higher dosages. If estrogenic effects become a problem, the addition of Nolvadex should of course make the cycle more tolerable. An anti-aromatase such as Arimidex, Femara, or Amonasin would be a stronger option, however probably not necessary with such a mild drug. Although typically dosage related, Boldenone undecylenate can also produce distinct androgenic side effects. Oily skin, acne, increased aggression and hair loss are all possible with this compound. Women find this drug quite comfortable, virilization symptoms usually unheard of when taken at low doses. Boldenone does reduce to a more potent androgen (dihydroboldenone) via the 5alpha reductase enzyme (which produces DHT from testosterone), however its affinity for this interaction in the human body is low to nonexistent. Therefore the reductase inhibitor Proscar would not be of much use with Boldenone undecylenate, as it would be blocking what is at best an insignificant path of metabolism for the steroid. Veboldex 250, Thaiger Pharma Although this drug is relatively mild, it still has a depressive effect on endogenous testosterone levels, therefore a proper post cycle therapy HCG and Clomid/Nolvadex is needed at the conclusion of each cycle to avoid a "crash". A waiting time of around 3 weeks is required before starting PCT, enabling enough of the drug to clear one's system to make PCT effective.

In order to maintain stable blood levels, Veboldex 250, Thaiger Pharma Boldenone undecylenate should be injected at least once per week. It is most commonly used at a dosage of 400-600mg per week for men, 50-150 mg per week for women.

Boldenone undecylenate is not a rapid mass builder, but will provide a slow but steady gain of strength and quality muscle mass. Veboldex 250, Thaiger Pharma The most positive effects of this drug are seen when it is used for longer cycles, usually lasting at least 10 weeks in length. The muscle gained should not be the smooth bulk seen with androgens, but instead a very defined and solid look. Since water bloat is not contributing greatly to the diameter of the muscle, much of the size gained Veboldex 250, Thaiger Pharma on a cycle of Boldenone undecylenate can be retained after the drug has been discontinued. It is interesting to note that structurally Boldenone undecylenate and the classic bulking drug Dianabol are almost identical. In the case of Boldenone undecylenate the compound uses a l7beta ester (undecylenate), while Dianabol is 17 alpha alkylated. Aside from that difference, the drugs are basically the same. Of course they act quite differently in the body, which goes to show the 17-methylation effects more than just the oral efficancy of a steroid. As discussed earlier, Boldenone undecylenate is a very versatile compound. We can create a number of drug combinations with it depending on the desired result. For mass, one may want to stack it with Veboldex 250, Thaiger Pharma Anadrol or an injectable testosterone. The result should be an incredible gain of muscle size and strength, without the same intensity of side effects if using the androgen (at a higher dose) alone. When used in a cutting cycle, muscle hardness and density can be greatly improved when Veboldex 250, Thaiger Pharma combining Boldenone undecylenate with a non-aromatizable steroid such as trenbolone acetate, Halotestin, or Winstrol. For some however, even the low buildup of estrogen associated with this compound is enough to relegate its use to bulking cycles only.

Boldenone undecylenate is not an ideal steroid for the drug tested athlete however. This drug has the tendency to produce detectable metabolites in the urine months after use, a worry most commonly associated with Deca-Durabolin. This is of course due to the high oil solubility of long chain esterified injectable steroids, a property which enables the drug to remain Veboldex 250, Thaiger Pharma deposited in fatty tissues for extended periods of time. While this will reliably slow the release of steroid into the blood stream, it also allows small residual amounts to remain present in the body far after the initial injection. Veboldex 250, Thaiger Pharma The release of stubborn stores of hormone would no doubt also be enhanced around contest time, a period when the athlete Veboldex 250, Thaiger Pharma drastically attempts to mobilize unwanted body fat. If enough were used in the off-season, the athlete may actually fail a drug screen for boldenone although many months may have past since the drug was last injected.